The impetus for this question was this medical advice question which (as of the time of writing) had 3 votes to close but obviously remained open.

As longtime users of this network know, it takes 5 votes for closure to close a question. However, for a long time, Stack Overflow was the exception, requiring 3 votes to close.

Last year, an initiative happened to test the expansion of this 3 vote requirement across the network. The results were very positive, with few drawbacks noted.

In the second Q&A, Catija notes:

I'll also be using the information I have to start 3-vote close/reopen on the other sites that have requested it.

This suggests other sites can request the requirement be decreased.

While the community moderators here are very active and close most questions quickly, given how many personal medical advice questions we receive, should we request the vote requirement be decreased to 3 for Medical Sciences?

We appear to have reached consensus in favor of decreasing the vote requirement to 3, with at least net +5 in support (+7/-2 vs +2/-5). With the full support of each of the 3 active moderators, we will move forward with the request to the Stack Exchange team.

The decrease in close-vote threshold is now live. It should only take 3 votes to close a question. For those users with the privilege, please do not hesitate to make use of your newly concentrated curating ability.

It's been a little while since you escalated this request to the Community Team — sorry for the slight delay!

You now officially only need 3 close votes to close a question on Medical Sciences SE!

After looking at the data, I think it's clear that there's no reason for y'all to have this threshold set at 5. Thank you so much for bearing with us while we got to this request.

We'll check back in with you all in a few months to see how things are going in this regard — if things are going great, we may not post an update, but please feel free to leave a comment here if you want us to post something.

Here are some basic stats on how things looked before this change:

Over the last two years, you've had decent numbers when looking into what percentage of questions that received at least one flag or vote to close actually ended up getting closed. While there are some dips here and there (the one in late 2021 is particularly noticeable), things have been generally in the 70-90% range, and the numbers of posts this represents are relatively small. 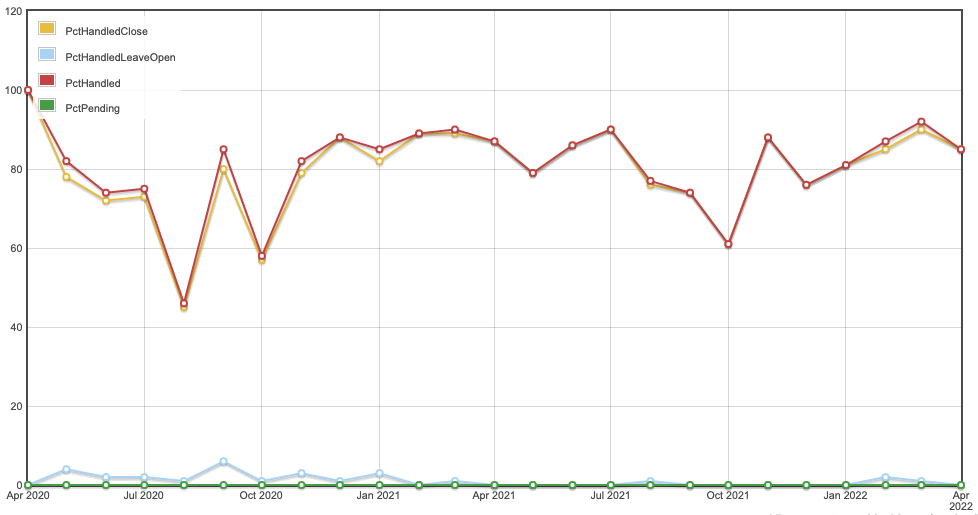 However, the graph below shows that the site moderators, rather than the community, are doing the bulk of the closing: 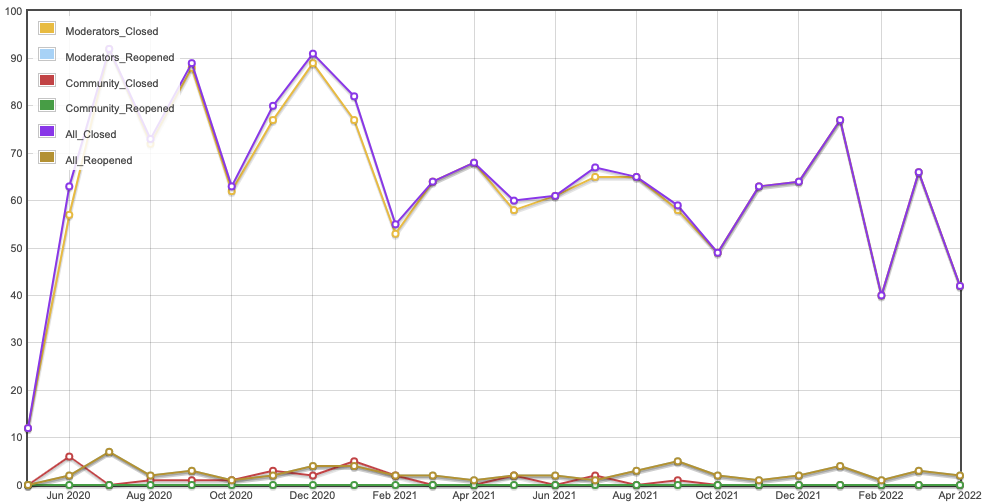 When working on this project, Catija (another CM) had found two primary use cases for this change:

Both of these are valid concerns here, to a degree. The first graph still shows that there are around ~15-20% of tasks aging out of the review queue on any given month.

Likewise, the second graph shows that the site mods here are casting the bulk of the final close votes. However, the mods shouldn't be having to make the vast majority of these decisions – even with other users weighing in. This creates an imbalance between closing and reopening, as the mods have to be really thoughtful about reviewing for reopening.

However, the main reason for the latter seems to be that there are very few non-moderators around who can cast close/reopen votes. Only users with at least 500 rep can cast close/reopen votes on the Medical Sciences site. There are actually a total of 80 users who have enough reputation to have this privilege, but less than 5 have been active on the site in the past week (only a dozen in the past month) – and that's including the site mods!

Basically, there’s no reason not to lower the close vote threshold on this site, which is why we've done so – but mods will still probably have to participate in a lot of the closing because there are so few users that can vote to close. Our hope is that lowering the close vote threshold to 3 for Medical Sciences SE can ease the load on the mods at least a little, but more regular users with the privilege need to participate in closures for that to happen.

Yes, we should. The reasons for this change include:

No, we shouldn't. The reasons for this include:

Not the answer you're looking for? Browse other questions tagged discussion status-completed featured vote-to-close .

6
Answers in comments for questions which you down vote or close vote?
5
Self-help questions
1
Could we request mods to step down?
7
New ''Off-topic" close reasons
0
Why can I not see close votes?