Revisiting Research, A reason to close

So this is a subject that's come up before, twice, but I'm not so sure we got to anywhere actionable. As mentioned in a comment, the fact that this community is struggling with professional involvement is a bit of an elephant in the room.

I think that a first step to addressing this problem should be requiring a minimum level of research, and an attempt to answer your own question.

Explain how you encountered the problem you're trying to solve, and any difficulties that have prevented you from solving it yourself.

I honestly think that this is a bare minimum to make the site work, really any SE site, and that we are not currently enforcing it.

Thus I have 3 questions that are sequential:

For (1) I would argue that the way someone shows that they can repeat the problem and solve it themselves in health is to do a basic search.

For (2) I think this should probably be at least a look at Wikipedia and the first page of Google hits. Even if the source is some crazy wrong blog article, it would at least substantiate the belief, and often articulate the point of view more clearly than the question. I think that if there isn’t a single citation or link in the question, it is very likely to fail this requirement.

For (3) I think without the full teeth of a VTC, the above attempt is not enforceable in a way that will get a point across to new and problem users.

I couldn't decide if I wanted to put this in as an edit or an answer, but after going through several questions tonight, I thought I'd throw it up here.

We only have 1 of our 3 canned off topic options occupied right now. I propose the following off topic VTC as a middle ground:

"This question is off topic because it concerns an unsourced or unsubstantiated position about health. To be considered for reopening, please provide a reference that clearly states your position."

I think that this will only solve half the problem, but at least it's the more annoying half. You will still find people unable to find the 1st Google hit that covers their questions (like the dietary recommendations of the Kidney Foundation for dialysis pts).

In response to @JohnP mentioning this meta question, and the logic tree displayed in the answer, I thought I would propose a different logic tree for us: 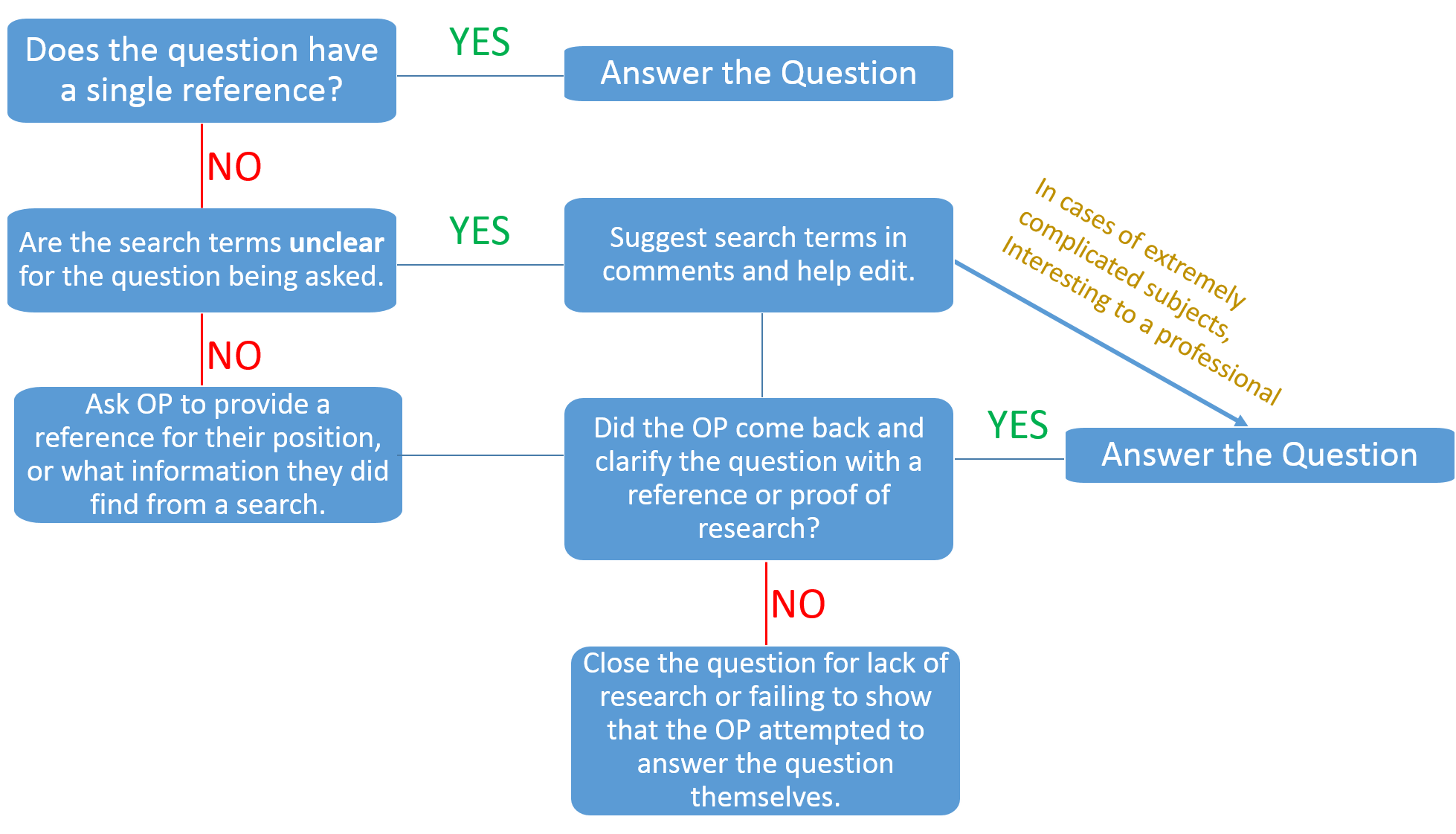 Again I think this is different from the close for general reference answers. I think our problem is users not actually trying to answer the question themselves.

For examples regarding "Are the search terms unclear," I think our current bounty question is a great example. That question would require knowledge of words I would not expect the public to know (stance instead of standing, biomechanics, and pathomechanics). Using the terms from within the question you can tell that it would be very difficult to get a good answer to the question.

However, there are plenty of questions, the one @JohnP pointed to for example, where even just DDG-ing (or Google I tried both) the question exactly as written provides an answer on the first hit or page of results.

Researching a question before you post it is a very good idea. However trying to measure the amount of research that was put into a question from reading the post can be impossible depending on the amount of information found. If it is a question about something where there is not a lot of information available, either outside of certain areas or at all, a person can spend a significant amount of time and find no information.

I don't think that strict rules and close voting are a good way to enforce research effort. My big suggestions would be:

I think the most important question to ask yourself when evaluating a question with respect to research effort is:

Would the OP still be asking the question if they'd done a little research?

If no, then it is indeed a bad question. I think the best thing to do in that case is downvote (after all, the site does explicitly provide this as a reason to downvote questions). If there are serious problems remaining (after dealing with conspiracy theory and general reference questions), that's where you can focus additional efforts.

If yes, then the question should be regarded as fine in terms of research effort, whether or not the OP actually has explicitly proved that they did the research. (Note that it could still be too broad, too unclear, and so on - all that is separate.) If the question can't easily be answered by non-expert research, then including a proof of that in the question doesn't actually make the question better.

I get the impression that you're trying to use research effort as a proxy for making those decisions about more specific bad categories, i.e. if the question goes away after asking for research, it must have been bad. But I think it's counterproductive to impose additional burden on good questions in order to weed out the bad ones.

To take a step back, I see that you're worried about attracting experts. That's a legitimate concern! And I agree, a good way to do that is to have really interesting questions!

However, I think there are a few disconnects between that and a "close without research effort" policy:

I come from far far away on the Stack Exchange network, and I've only just come across this. However, there's something going on here which I need to point out.

Scroll back up to the question. Hover over the downvote button. Read the tooltip. Go on, see for yourself. It says this:

This question does not show any research effort; it is unclear or not useful

Emphasis mine, and very deliberate.

Lack of research, by itself, is not a reason to close a question. It is okay to close a question if the answer could be found as the top result of an obvious Google search - that's just lazy and shouldn't be around here. But research is somewhat subjective: someone could have done their own research, have nothing to show for it, and not be easily able to demonstrate it.

...a minimum level of research, and an attempt to answer your own question.

Why is this community here, if not to answer questions? OK, it's fair to require minimal effort to solve your own problem - a Google search or two is not a difficult task. But if someone's tried that, it's unfair to close their question because you think they haven't. Downvote it, if you must, but don't close it.

On the other hand, you have the downvote button. It's there for exactly cases like this: questions that you don't think are very high-quality, are unlikely to help anyone else, etc etc. That's the correct tool for this job.

See also: A Close Vote is not a Super-Downvote. Please don't use it as one.

I like the logic tree in @AtlLED’s answer and I think that we all need to follow some sort of method to enforce prior research when asking questions.

I am also an active member of Psychology.SE where, being also a science-based site, they actively insist on prior research. Now we have rebranded to Medical Sciences I think we need to follow suit.

In my answer in meta to standard comments I spoke of an off-topic close reason for this purpose which Psychology.SE use, which has subsequently been modified within the answer.

This question is not framed in the sciences of health. It is based on assumptions which are not made explicit, are not well-motivated (e.g., referenced), or are not held to be true within any of the research fields on-topic here. Please edit your question to provide more information on… (your research, why you are asking this question, what problems are you having understanding your research…)

Motivation and effort needs to be shown that the OP has tried to research their question. Answers can take a lot of time and effort in themselves, especially with complex subjects requiring a lot of referencing (which is also required here). Why should an anyone answer a question posed which shows no prior effort from the OP?

If no prior research was attempted, it can often be evident when a quick Google search immediately provides an answer. If you attempted to research but can't find anything, then provide an idea on what you searched for. We are all helpful here and will provide assistance where needed.

We are not looking for references for literally everything. Anything commonly known such as "a common cold is primarily evident with a runny nose" doesn't need referencing, but anything not as well known does. Especially when someone says "I read that...". What did you read? How can we also read it? (What are the details?)

Adding at least one link to an article or book on the subject not only provides evidence of prior research, but also gives any potential answerer an idea on what the OP has already read in order for them to not repeat that and concentrate on what is not known or understood.

I would suggest we create the close reason I mentioned for us to use and maybe in the meantime we use the "other" close reason and put the reason in there.

Not the answer you're looking for? Browse other questions tagged discussion close-reasons vote-to-close .

6
Standard comment situations: suggestions for close votes and down votes
8
Your Input regarding the Future of Health.SE
1
Can we change our mods here?
12
What kind of research is expected here before asking questions?
6
How to encourage people to contribute?
5
Should we edit Personal Medical Advice questions?
8
Out of scope: “please identify my observed phenomenon” and other plausibility questions
4
Is it OK to ask questions that don't show any research?
3
Some moderators are too quick to delete comments
2
Let's open a discussion on building in quality control measures that encourage higher quality posts/answers
See more linked questions

10
“Primarily opinion based” and the dangers of unknown unknowns
7
Choosing custom off-topic close reasons
13
Site specific reason for deleting answers: Misinterpreted references
5
When is “primarily opinion based” a valid reason to close?
8
We Need a Crystal Clear “Rules for Asking Questions” - Agree or no?
3
What close reason for nonsense questions?
2
How to deal with “wrong” answers that do attempt to answer the question?
8
New ''Off-topic" close reasons