I was going through the Users tab when I accidentally clicked moderators and saw a fourth one. I didn't know if this was a bug or a new moderator. I know the site once had four, but I wasn't sure. Does anyone know what's going on? 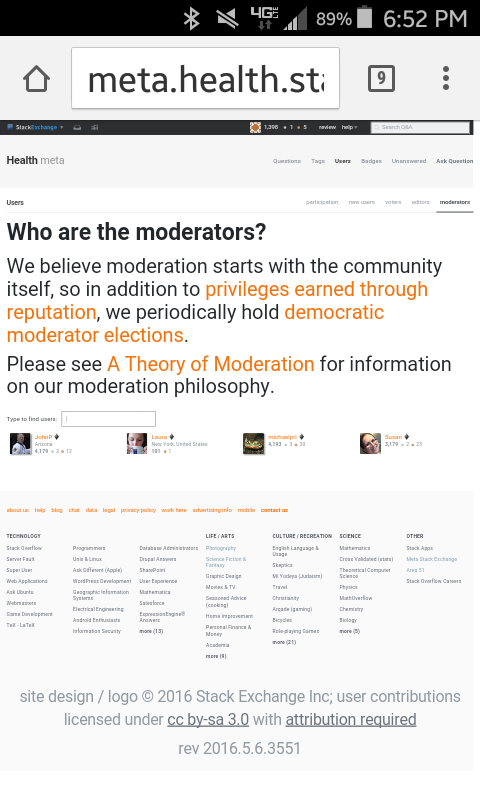 The new mod hasn't been here in a while based on stats, but it appears they work for Stack Exchange. I refreshed and waited a bit, but their still there. It doesn't show up on the main Health SE either, but the site sometimes does have a lag. Either way I'll still welcome to Health SE :)

This is a glitch, reported at SE employee appearing on the mod list on every per-site meta

In a nutshell: Laura had mod abilities on this site (and others), being an employee. Employees are suppressed from moderator lists. When they leave the company (as Laura did), the employee status is removed at once, but the diamond sometimes lingers. Has diamond + not employee = appears in the list of moderators.

Not the answer you're looking for? Browse other questions tagged support bug moderators .

1
Should mod remove answers which doesn't address all sub-questions?
3
Should my answers get removed, because of my personal style?
1
Can we change our mods here?
19
State of the site - moderators
5
Reporting potential typos on the contents of this community/site resources?
1
Is the vote-up for comments added to the reputation?
1
Could we request mods to step down?
3
Re-Evaluating Site Moderation
5
Question on Food Safety put on hold as not medical sciences