I'm curious where the line is drawn by what is interpreted as quotes only answers and how the method of quoting used it interpreted as being quoted only by some people it seems.

UPDATE: After getting more feedback I decided to delete my answer, but originally I'll copy my final edit below in the fully quoted part of this question which I started to update and had to step away from for a while (see screen shot of my comment to the OP). When I came back I saw the comment on my non-finalized answer by @anongoodnurse with a Meta post to quoted only answer not being good answers, etc.

This comment was made 2 hours ago on my post but then there was DaveL's answer that was there (3 hours ago) with with a mainly quoted only answer as well with no comment from this person about his quoted only answer which is a little differently quoted format wise that the method I used to format my quoted or referenced answer.

Note all (1) - (5) parts of this answer are quoted or referenced yet no comment by the complainer on this when this answer was obviously there too when it was decided to suggest I need to read a Meta post about quoted only answers not being good answers but not any comments with this respect for DaveL's answer. 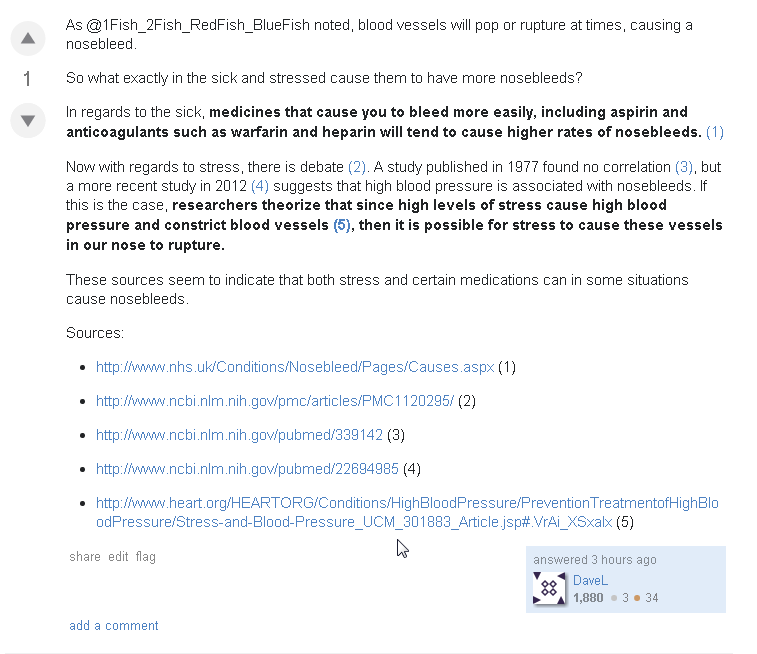 My Question or Concern

So I guess I'm wondering if I'm being scrutinized here in a bias type manner and if so would it be based on perhaps the rep I have versus the other answerer, is it truly a matter of the complainer interpreting my quoted references differently versus the method DaveL used, or what's going on here?

The point is, what I had and what DaveL had were both quoted or referenced answers only and these were both there already at the time anongoodnurse put the comment on my post so I'm not sure why there's a concern with the way I quoted the references to the source I got the information from versus the way DaveL posted his. I'll be glad to change the way I reference sources and not used the HTML quote tags if that does away with concern at this level if it's all a matter of the method I used.

Why do people get nosebleeds from overexerting themselves or when they're sick?

As pointed out in the answer provided by @DaveL and a few great sources he found, it appears there is some debate in the medical community whether or not stress is a direct trigger of nosebleeds but it's certainly at least an indirect cause due to other conditions or [medications] chemicals one is exposed to for managing these conditions (e.g. blood pressure meds, anti-anxiety meds, etc.).

An accurate answer to your first question needs some basic understanding of the usual types of nosebleeds, so here's a good source explanation and I'll quote the relevant parts.

The anterior nosebleeds are more common per a group of vessels in the nose that can become delicate and easily disturbed.

The posterior nosebleeds are less common and come from an artery in the back of the nose and these are harder to manage.

Nosebleeds most often come from the front of the septum, the cartilage that separates the nose into two nostrils. These anterior nosebleeds comprise 80 percent of all nosebleeds. A mass of blood vessels, called Kiesselbach's plexus, lie on either side of the septum. These blood vessels are easy to injure and bleeding can occur.

Posterior nosebleeds, which come from the back of the nose, are less common and much harder to manage. Bleeding usually begins in the upper part of the nose and flows toward the throat and mouth where it is swallowed. It is difficult to determine how much blood is lost in these nosebleeds.

Ultimately, how does the nosebleed typically occur?

Some of the common causes of nosebleeds in general come down various to sicknesses, injuries , or chemical irritations. Basically it comes down to a group of blood vessels inside your nose that are often delicate and easy to disturb. Once distrubed, bleeding from those vessels occur and thereby you get a nosebleed (see below for quoted source as well).

The most common cause of nosebleeds is injury from picking or blowing the nose. People with respiratory allergies , hay fever, and sinus infections have swollen nasal membranes that are fragile and more likely to bleed. Physical injury to the nose from falls, sports , or fighting can also cause nosebleeds. Chemical irritants such as cleaning products, aerosols, and paint can irritate the nose, sometimes resulting in nosebleeds. In addition, some drugs, such as cocaine, inflame the nose, causing it to bleed. Children with deviated septums or crooked noses are also prone to nosebleeds.

Another cause of nosebleeds can be related to strenous exercise or overexerting oneself with physical activity. This too basically comes down to a group of blood vessels inside your nose that are often delicate and easy to disturb. Once distrubed, bleeding from those vessels occur and thereby you get a nosebleed (see below for quoted source as well).

A nosebleed can occur from something as simple as blowing air too hard out of your nose. This can occur when you are exercising because you tend to breathe harder than you do in your everyday activities. Intense straining during exercise also can disturb the delicate blood vessel lining and contribute to a nosebleed. Also, the environment you are exercising in may cause a nosebleed because exercising in dry, cold air is associated with greater risk for nosebleeds because the air dries out your nasal passages and makes them more vulnerable to damage.

Your answer did contain plenty of blockquotes, but each and every one of them was commented on in your own words. So I disagree with the comment you got. (Irrelevant here, but I actually quite like your answer, and your style where you gave some background information first - it sometimes necessary and very helpful).

I don' think that you need to compare your answer to others (although I understand that your aim was to test for possible bias) - each answer should be assessed on its own merit. As far as bias goes the important thing to remember is that behind every user on SE is a human being, and our decisions/opinions tend to be biased sometimes. Voting, and especially comments are not based on a 100% objective, precise criteria. Some directions exist in meta and the help centre, but they are guidelines, subject to interpretation. Some users stick to those firmly, some loosely. In the end, the comment you received was just one person's opinion.

If it helps, I'll give you a personal example: I recently got a comment on a piece of my answer that wasn't supported by references. Although I did agree that I should have omitted that little bit I had no references for (and edited the answer to take that part out) I did object to the manner in which the comment was made, since it was overly harsh. On another answer, I got a non-constructive comment about having too many references(!) from the very same user. So, sometimes, not only do different people have different criteria, but the same person can have fluctuating standards.

In the end, I wouldn't have removed my answer based on one comment if I were you. There are better options:

Writing about it on meta was also a good option, since the comment you received was no way to greet a new user. But I would consider putting that answer back, so it can get some upvotes.

I'll address the reputation bias: the reputation does not always matter. All my answers but one got deleted by an admin for being quote only (even though the quotes were clearly answering the questions and there were no need to comment, as the number of upvotes testified). I had a high reputation when that happened. Be happy your answers didn't get deleted (deletion of comments also happens way too often and too fast on this Stack Exchange website).

Not the answer you're looking for? Browse other questions tagged discussion .

3
Some moderators are too quick to delete comments

1
Should mod remove answers which doesn't address all sub-questions?
4
Glaucoma answer removed because of a shotgun approach?
6
Giving sources when you only trust them partially
3
Are questions about medical research protocols on-topic?
2
The Tag Year 2017
3
was this a personal advice question?
7
Why is my question closed as “off-topic” for this site?