Can we change our mods here?

First of all, I'd like to apologise if I offended anybody here by asking for the second opinion about my removed answer (I really do). Usually when you go to the doctor, you've right to do so. And this post isn't aiming for it either.

I'm one of the first users during private beta who was trying to help here by keeping the beta alive and answering the questions longer than 1-2 sentences by giving the people a good example and raising the bar here (and it wasn't for rep, but by giving the chance for this site to go forward into the public beta). And now I think the bar was raised too far.

Why am I not here?

Since the beta site got into wrong hands (this is in my humble opinion and I'm not trying to offend anybody), things got worse here and into wrong direction and as result: many private beta people left (I had many vote adjustments, because of removed users), I've been banned for a week for unclear reasons by discussing quality our answers on meta (by having good intentions), my answers on which I've spent several hours got removed (for unclear reasons which we even can't discuss) and further more.

What's the point here? I was not participating here for over 4 weeks (a month)! and observing how the site is going forward. The results? It's actually going backwards.

Evidence? I'm still the most active user here! Which gives something to think about. 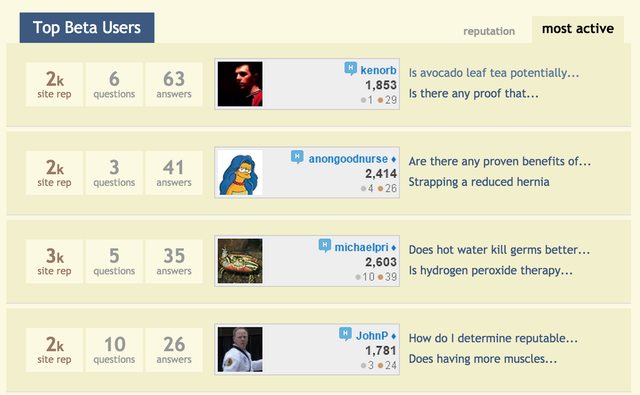 Who is behind? Of course the mods (who obviously won't remove their own answers for obvious reasons, because they've power to not do so)!

Which is I think the main reason why people are not participating here anymore, because they don't want to spent hours of answering something which is criticised and send to the bin anyway. The site was much active during the private beta than now.

I was thinking what we can do here to improve our site, see below: 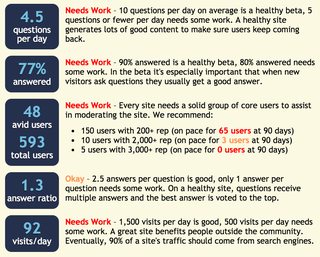 and I don't think promotion of ads or asking who are you would help here for obvious reasons. Comparing the other SE beta sites, something definitely is wrong here and it's not about the topic that is too narrow or something similar, but simple - the site is badly managed and people are not encouraged enough.

I understand the following post is quite controversial, but I don't see any other solution for our outstanding problem here. If we won't change anything, this site would be dead very soon. And obviously we should do something unless it's too late. Seems nothing else worked so far.

So basically I'm requesting re-election of our Pro Tempore mods. I'm sorry if I can't request that. However I remember it very clearly how people behaved and how badly they wanted to become mods on chat for their own personal reasons (pleasing people to up-vote them and badly searching for down-voters), and now we have what we wanted, the deadly site.

If you don't care about the site, go on and down-vote.

P.S. One of the very few people who joined later on and is trying to help here is @michaelpri (as well as on LifeHacks, which has some activity problems as well), who's trying different methods to push the site forward (here, here and here) which I appreciate.

2 out of 4 community mods resigned last week: State of the site - moderators

If I understand you correctly, your argument boils down to this:

I don't find this logic particularly compelling. You're currently responsible for roughly 15% of answers on the site; that's impressive, but hardly gives you a majority vote in terms of who moderates here. Furthermore, that's based nearly entirely on your activity before moderators were appointed here - you've been mostly inactive for the past few weeks, while the number of other active users has increased.

And that's the critical metric here: a site like this isn't one person answering questions, or even 5 people answering questions; a healthy site welcomes anyone with the expertise to answer the questions being asked, even if they only ever post a single answer. Health is not such a narrow topic that you can expect a small handful of people to provide good answers to a majority of questions; that long tail is as important (if not moreso) than the few users with the most answers.

And that is the big fat problem this site has to solve, of which the moderators are acutely aware: there aren't enough people answering here. It doesn't matter if you or the mod team are answering tons of questions; if y'all are the only folks active, this site is not going to do well.

I strongly encourage you all to work together to find ways of better welcoming new answerers, introducing them to the site, and helping them to write answers that will be rewarding to the author, the asker, and those who come after.

I intentionally appointed a fairly diverse group of moderators specifically because I knew this would be a challenge - my hope was and remains that these differences in experience and background will allow them to work with the community here to find productive ways of communicating and growing.

Throwing this out and starting over isn't a solution; it's giving up. On the site, on the community that formed it, and on any hope we might have for its future.

First I should say that I only will ever have periodic participation in any SO site, this one included. That's simply due to busy life of a clinical researcher and basic scientist.

I will also note that I have had little engagement one way or the other with negativity that might manifest in this site/community.

I will say negativity has nothing to do with my lack of involvement here. This is the only SO site where I feel like I participate solely to help out, and don't think I can get anything out of it as a professional. For comparison, I think I can ask a doctoral level (practical or theoretical) question on .Biology, and get an equal quality response.

With the loss of Susan and anongoodnurse we are now down two more MDs. There's a good chance MDs don't make good moderators and I'm not sure I have an opinion on their departure (I would actively not want to be one). While I'm not leaving per-se I don't have a particular desire to slug through several of the questions at a high level, if the site is not operating at a high level as a whole.

I will also be the first to say that people with doctorates have many faults and are just as human as the public, but they are also a corner stone of modern Health/Medicine. I am no way wanting to diminish the work of nurses, technicians, engineers, etc, as they can often have better advice or more knowledge on any particular subject (a long time ago I was an EMT-P).

I am concerned, rather, that this site doesn't seem "worth it," to people I have shared it with who do have doctorates, myself included.

Not the answer you're looking for? Browse other questions tagged discussion support moderation beta moderators .

18
Who should our Moderators Pro Tempore be?
11
Who are you and why are you here?
8
Community Promotion Ads
14
Should we initiate assisted dying?
19
State of the site - moderators
12
Is Health.SE sick?
7
Revisiting Research, A reason to close
-6
What's wrong with this answer about a cold?
-5
How to encourage the mods to discussing the site name?
7
Do you really want a comment with your down vote?
See more linked questions

23
Share with us. What is your impression of this site?
4
Are people being too quick to accept answers?
3
Confusing CPR question
4
Glaucoma answer removed because of a shotgun approach?
3
Should my answers get removed, because of my personal style?
12
Is Health.SE sick?
3
Welcome the new mod?
1
Could we request mods to step down?
3
Re-Evaluating Site Moderation