What is the status of Medical Sciences (Dec '20)?

Basically I just want to update my understanding about the status of this site:

I've read several old discussions in the past couple weeks, but no newest meta post in the last year that really seem to be important for the site. 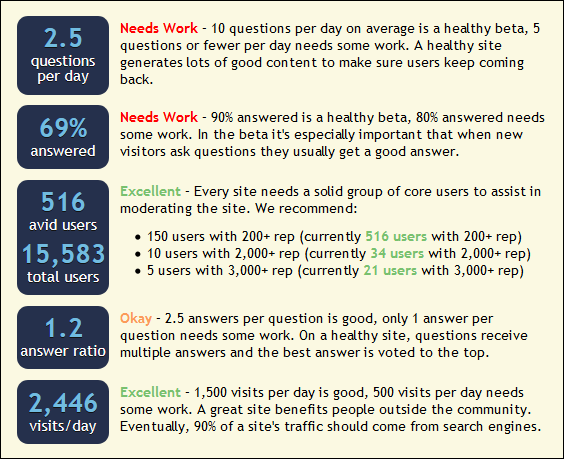 I'm not sure how to answer this question, but my perception is this site has two major problems:

The first and most serious problem is a lack of high-rep, knowledgeable users who can answer questions at the level we're aiming for. Over the course of the last two years, a half-dozen high-rep users have wandered off and are apparently no longer active. That's really a shame because we went to a lot of effort to revamp the scope of the group in the way that all those users agreed should be done. In my view, the result is the reworking of the site has had no positive effect. Now, that's not to say those users left only this group. I've checked and in many cases they haven't been seen in any group they previously followed. This is normal and to be expected for any group, but when you can count the high-rep users on one hand, losing just one or two hurts.

The second problem is the daily bombardment of -- quite frankly -- utterly crap questions posted by new users (people with 1 rep or 101 rep) who don't bother reading the guidelines first. Even putting the "no medical advice" rule in bold on the main page didn't help deter those questions. Too many people simply don't read anything before posting.

But the most annoying to me personally are the "almost good" questions that demonstrate absolutely zero prior research posted by people who have high rep in other groups (the 101 rep users) and so obviously aren't stupid and know how SE works. I close a ridiculous number of such questions every day despite having set the bar very low for what qualifies as "prior research."

Honestly, this site has been a struggle since day one and I am just not sure it's a viable topic for this kind of a QA format.

Two years ago I went along with the others who felt we needed to change the scope of the group and make it more in line with the other science and academic sites such as Biology, Chemistry, History, and so forth. We changed the name and made the rules more academically rigorous in the hopes it would attract a more enlightened following. Unfortunately, after spending two years enforcing those new rules, I'm prone to agree with JohnP that medicine just isn't a viable topic for the stackexchange model. Too many web surfers land here via web searches, don't bother reading the guidelines, and have no intention of remaining and contributing value once they get their question answered about how much masturbation is too much or whether it's harmful to drink cold water.

So, all in all, I'm not sure this group is viable and I doubt it will ever graduate from beta. The good answerers won't come until there are mostly competent, interesting questions, and achieving that seems impossible. A medical site is just too enticing to every web surfer in the world, and attracting medical professionals is hard enough without them taking one look at the list of questions and deciding to move on because, quite frankly, most of them are crap.

Is its activity better than the last years?

What is the status of Medical Sciences (Dec '20)?

Is its activity better than the last years?

No, it is declining. See https://medicalsciences.meta.stackexchange.com/site-analytics if you have enough reputation points (the temporary spike in 2020 is due to covid):

Only 1 mod is still active. On https://medicalsciences.stackexchange.com/users?tab=Reputation&filter=year you see that only 6 users have gained over 1,000 reputation points this year, which means they are very few regular contributors.

I have asked over 4000 questions on over 50 Stack Exchange websites and https://medicalsciences.stackexchange.com is definitely the worst Stack Exchange website. For background, I work in research and have published in medical venues, so I know what constitutes a good medical question and answer.

Not the answer you're looking for? Browse other questions tagged discussion .

12
39 questions of mine deleted, and counting. How do you expect users to write well written questions?
7
Change in my moderation practices
0
Why was this question on post-surgery wound care closed by mod as “personal medical advice”?
0
Why was this answer on how is Lopinavir + Ritonavir is expected to stop COVID-19 deleted?